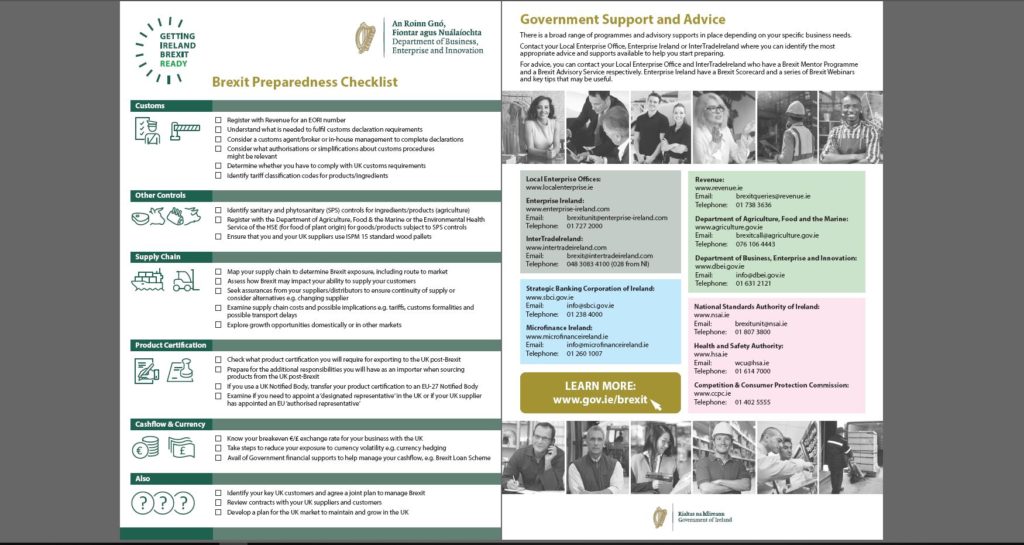 Ireland Brexit Preparedness Checklist provided by the Department of Business, Enterprise and Innovation.

June 20th-21st, 2019: EU leaders meet at European Council summit in Brussels to assess the progress made by Britain to reach an agreement on the UK’s exit from the EU.

June 30th, 2019: This is the date that May has previously said would be the latest date that the Brexit “Article 50” process can be delayed until.

July 2nd, 2019: New MEPs take their seats in a new session of the European Parliament.

October 8th, 2019: The last practical polling date on which a British prime minister could hold a general election or second referendum before the next Brexit deadline.

October 17th-18th, 2019: EU leaders meet for the final European Council summit before the UK’s extension is due to expire.

December 31st, 2020: If the EU and UK have agreed a Brexit treaty and agree a future trading relationship, this is the earliest date by which the transition period will end.

December 31st, 2022: the date the EU’s chief negotiator Michel Barnier has proposed extending the Brexit transition to in order to allow the EU and UK negotiate a trading deal. Under the withdrawal agreement this is the latest date on which the transition period can end. If it were extended until 2022 it would mean that the UK would stay within the single market and customs union for six and a half years after the Brexit vote.